The Tulane Debate Society collaborates through the Crescent City Debate League with students, teachers and principals at over a dozen New Orleans middle schools, one middle school in Hazlehurst MS, and students and faculty at Xavier University. Our central goal is to provide opportunities for the middle school students of New Orleans to engage in civil and civic discourse and to empower them to become the leaders of tomorrow.

The Tulane Debate Society is grounded in an English Department service-learning course that aims to revive the principles of classical rhetoric described by Aristotle, Plato, Cicero, and Quintilian, and put them to work in New Orleans to promote civil discourse and critical reasoning.

Before the fall of 2009 when the Tulane Debate Society partnered with teachers and principals to launch debate teams at three local middle schools, middle school debate programs were virtually non-existent in New Orleans. Today over a dozen middle schools actively compete in debate and our regular tournaments and teacher workshops continue to attract more schools.

In the spring of 2010, the Mayor of New Orleans, C. Ray Nagin, officially recognized the good the Tulane Debate Society had already done for the city by bestowing a day of honor on the founder and director of the program, Ryan McBride, an Administrative Associate Professor with a joint appointment with the School of Liberal Arts and the Center for Public Service, as well as the teachers from the three original middle schools involved in the program, including Jeffrey Warner from Sophie B. Wright Charter School, Lynn Loewy from Lafayette Academy Charter School, and Barbara Brewster from Banneker Elementary School.

Since that time, the citywide debate league and Professor McBride have also been recognized and honored by Mayor Mitch Landrieu. Kwame Anthony Appiah, the Laurence S. Rockefeller Professor of Philosophy at Princeton University, awarded the organization an American Philosophical Association grant.

The Tulane Debate Society hosts four citywide middle school debate tournaments in New Orleans each year – two in the fall and two in the spring. The tournaments all lead up to a final tournament of the year in late spring, the Andrew A. N. Pritzker Debate Tournament. 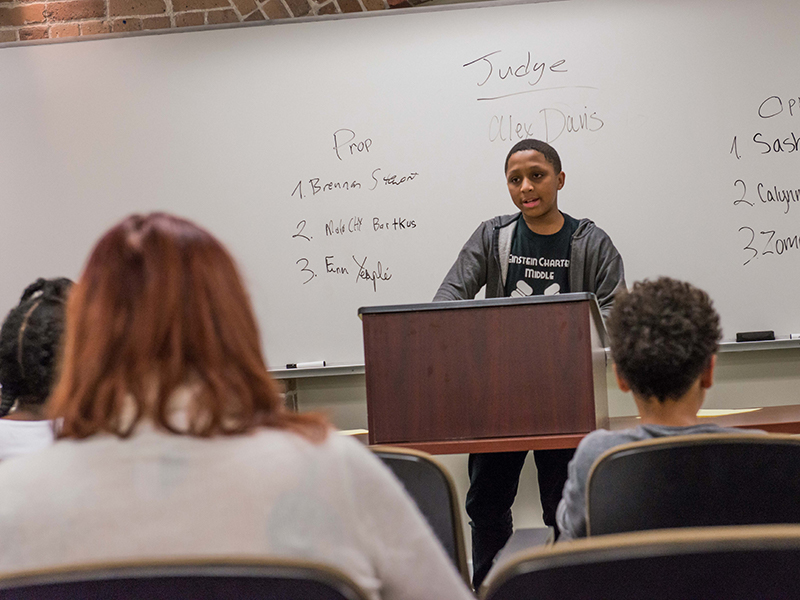